Cannes, March 21, 2019 – Thales Alenia Space first used additive manufacturing a few years ago with the 3D-printed aluminum antenna brackets for the TürkmenÄlem/MonacoSAT satellite, launched in 2015, and the polymer tube supports for the Iridium® NEXT constellation. The Koreasat 5A and 7 telecommunication satellites, orbited in 2017, featured the largest 3D-printed spacecraft parts ever made in Europe at the time. Today, Thales Alenia Space is taking 3D printing into series production to make components for telecom satellites built on the company’s new all-electric Spacebus Neo platform.

Spacebus Neo will feature four reaction wheel brackets made of aluminum and 16 antenna deployment and pointing mechanism (ADPM) brackets: four in aluminum and 12 in titanium. The innovative 3D-printed reaction wheel bracket is designed to meet market demand for lower costs, now reduced by about 10%, and shorter lead times, with production schedules cut by one to two months. The new part is also 30% lighter and offers improved performance.

The metal powder-bed fusion technique used for these parts allows series production with a high degree of customization, making it possible to tailor designs to the exact requirements of each new mission. The four reaction wheel brackets for each satellite, for example, are 3D printed as two sets of symmetrical parts, while the orientation angles and interfaces of the ADPM brackets can be adjusted to their specific function and position on each satellite. Thales Alenia Space has also incorporated connector and cable fittings directly into the overall design, which is printed as a single-piece part, thereby avoiding additional assembly requirements. 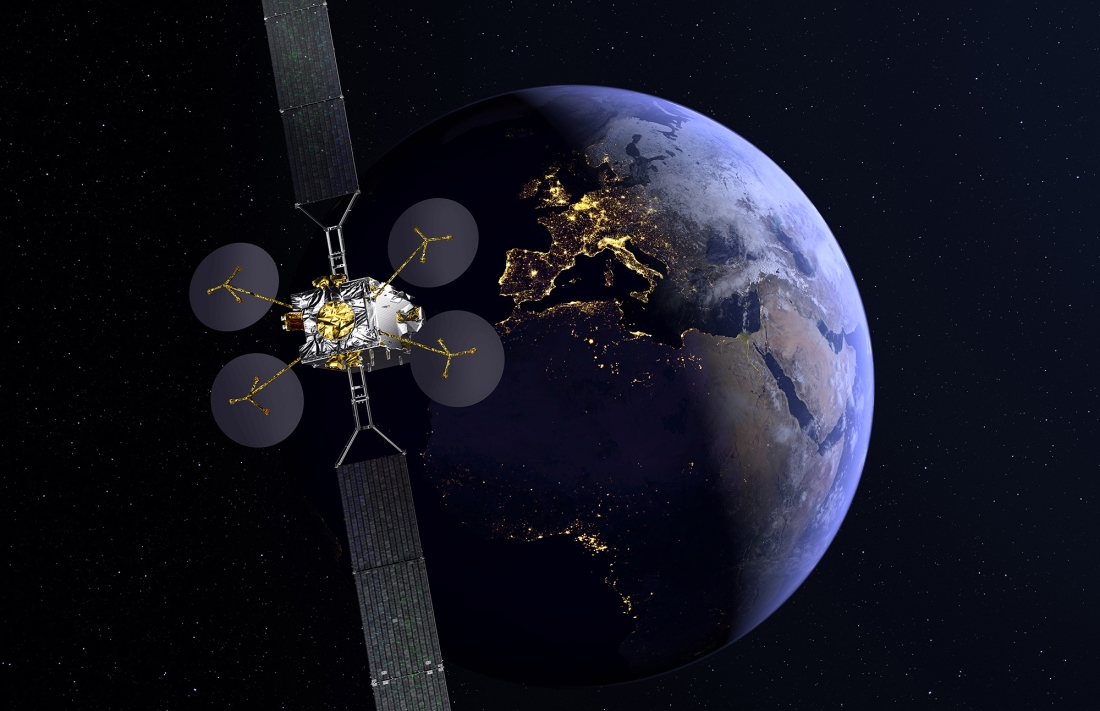 The first four parts have already been integrated on Eutelsat’s Konnect satellite, which was successfully mated earlier this month. Other Spacebus Neo platforms will also feature organically designed 3D-printed parts in the near future.

“Eutelsat is now fully involved in the development and use of 3D-printed satellite parts at all stages of the process, from design to final delivery,” says Philippe Sicard, engineer at Eutelsat. “These parts are recognizable by their highly specific design. And to ensure the most stringent quality standards, the overall process and individual components are robustly traceable and we have set up a comprehensive testing and inspection process.”

Drawing on over 40 years of experience and a unique combination of skills, expertise and cultures, Thales Alenia Space delivers cost-effective solutions for telecommunications, navigation, Earth observation, environmental management, exploration, science and orbital infrastructures. Governments and private industry alike count on Thales Alenia Space to design satellite-based systems that provide anytime, anywhere connections and positioning, monitor our planet, enhance management of its resources, and explore our Solar System and beyond. Thales Alenia Space sees space as a new horizon, helping to build a better, more sustainable life on Earth. A joint venture between Thales (67%) and Leonardo (33%), Thales Alenia Space also teams up with Telespazio to form the parent companies’ Space Alliance, which offers a complete range of services. Thales Alenia Space posted consolidated revenues of about 2.5 billion euros in 2018 and has around 8,000 employees in nine countries.. www.thalesaleniaspace.com