Maryland introduced its new, highly secure driver's license​ and state-issued identification card.  It's good news for the state's residents, including millions of drivers who need a license to prove their entitlement to operate a vehicle; and for law enforcement too. Now when individuals renew their driving license or identification card, they'll be getting a high-tech ID card that keeps their data safe from tampering, and that makes it easier for police and other authorities to verify a person's identity.

But it's bad news

for the fraudsters, who'll be confronted with a wide array of security features that are virtually impossible to replicate.

These will include some particular engraved images – important Maryland symbols such as the state flag (see top left), the blue crab of the Chesapeake (bottom right), and the Baltimore oriole, the official state bird, which all appear on the new identification card.

The state-issued identification card is widely used as a photo ID by residents who do not have a driver's license or are too young to have one. Both are regularly handed over to verify a person's identity, for example, when boarding an airplane, getting a job, or setting up a bank account.

Concerns about identity fraud and counterfeiting are driving many states to upgrade their DMV issued cards. And over recent years, we've seen an acceleration in new driver's license programs to improve security, but also to comply with the Real ID Act.

This Act, due to come into force in October 2020, but delayed to the end of 2021 because of the pandemic, has set out to improve the reliability of state-issued ID documents like the driving license.

The driver's license is seen as key to overcoming identity fraud because so many more people carry a driving license than other forms of ID like a passport. Law enforcement agents need to be sure that such government-issued identification documents are authentic and know that the document holder is who he or she claims to be.

The Department of Homeland Security continually updates the lists of US states compliant with the Real ID Act, and whose driver's federal agencies will accept licenses as proof of identity. 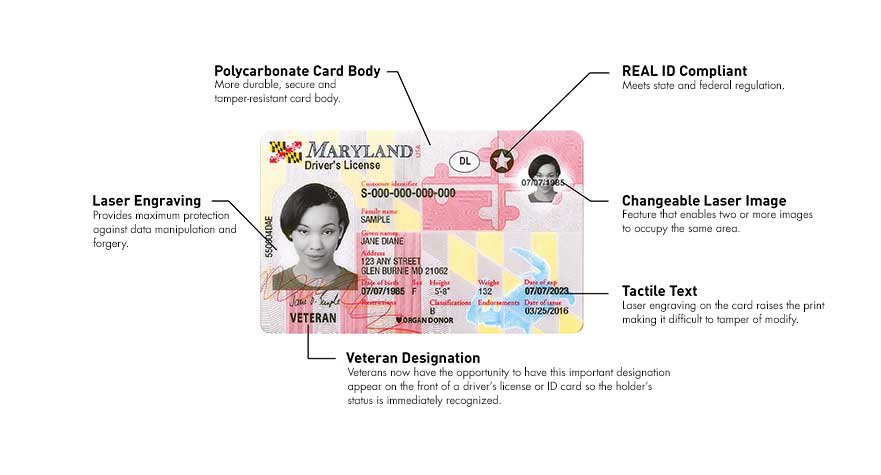 At the heart of this solution

is a polycarbonate card that's impossible to delaminate as it fuses security elements into the inner structure, making any attempts to tamper with the laser engraved data immediately visible.

Among its wide assortment of easy to detect security features: an image that changes as you tilt the card, raised print for tactile verification, and a unique machine-readable barcode.

A polycarbonate card, with its unique security features from laser-engraving to enhanced visual and tactile effects, makes it the material of choice for many government authorities for their secure identity documents.

The secure technology features applied to the new Maryland driving license and state-issued ID cards mean that documents will be produced and sent from a high-security Motor Vehicle Administration facility - a procedure already in use by state and federal agencies in over 30 US states.

Thales has been working with state officials in Maryland to prepare for the transition to the new personalization and issuing procedure for driving licenses and ensure the protection of Maryland drivers and their personal information.

Drawing on Thales' experience of providing secure documents, identity solutions, and services in more than 200 government programs worldwide, Thales and its local company MIDS  are active in numerous US driving license and vehicle registration projects including the states of:

"Get ready for a new driver's license. Marylanders will be getting new protections with the latest issue of the state driver's license and WJZ's Pat Warren reports on the change and what will be expected of all of us. Pat?

Of all of us is right. However first and foremost this is going to make Maryland one of the most secure driver's licenses in the country. Getting a driver's license or state IDs are practical necessity for most Marylanders which also means there is a lot of information floating around out there along with for the market for fakes.

These are counterfeit licenses that ONE officer in Howard County has collected. One officer!

Maryland's current technology makes not only subject to counterfeit but identity theft and fraud.

That's about to change!

Those are things we know about. So if you try to pass off a fake license to any law enforcement official, we know right away based on the security features that they have in place. The MVA will begin issuing the new licenses and IDs next month, June 20th. That's right and up till June 20th, there is nothing for you to do and then after June 20th, you only have to expect a new license when your old one comes up for renewal. I'm Patt Warren reporting live now back to you.

Patt, thank you for explaining to us. There will be no changes though in the licensing fees."​