The Netherlands is a densely populated and highly developed country where mobility is a critical factor for the economy. Eleven million of its 17m citizens are drivers.

From January 2005, a new law was passed requiring all Dutch citizens and residents aged 14 and above to carry a valid ID document. A driving license was one of the few documents permitted as a means of secure identification alongside a passport, Dutch or European ID card or residence permit.

In 2013, the government opted to upgrade its program and introduce a new driving license model, enabled with a contactless microprocessor. As the country was already using a card solution, contract optimization and process re-engineering resulted in this contactless chip-based document at no additional cost to either Dutch drivers or the authorities.

RDW​, an independent administrative organization of the Dutch government, selected Thales' polycarbonate electronic driving license (eDL)​ for its strong protection against fraud​ and forgery and advanced document design integrating a microprocessor. The new eDL combines several visual, physical, and electronic security features​ that make the card harder to copy but easier to use. 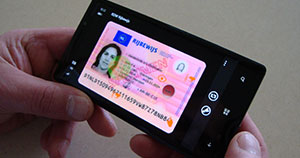 ​​The inclusion of a microprocessor in the electronic driver's license (eDL) enables police to read​ the card's data and electronically verify the authenticity of the document using smartphones when on the move. By improving interconnection and communication between police and other state agencies in the field, the new eDL will facilitate more efficient and effective law enforcement.​​​​​

To learn more about what's so special about polycarbonate, visit our web dossier dedicated to polycarbonate for IDs​.

"​Ensuring only authorized drivers take to the road is a vital element of any road safety program: André Uuldriks, Unit Manager of the Driving License Department at RDW. "

The new electronic driving license strengthens security as it is much harder to falsify and ensures that authorities can visually and electronically validate the document to match the identity of its holder. Officials have also welcomed the increased security the eDL brings with no increase in the cost of issuing.