Digital driver’s license - your ID in your smartphone 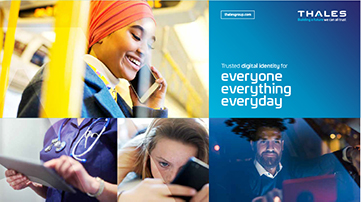 The use of mobile and digital technology in today’s world is ever-evolving but rapidly becoming relied upon for many everyday tasks.

Safety, convenience, and ease of use are key drivers for this trend, especially for transactions that require some form of identification. And one of the most used documents to confirm identity and proof of age is now going mobile - the driver's license.

The primary goals of the driving license, whether physical or digital, remain to confirm the identity and to confer the right to drive a vehicle.

During the last few years, studies and pilots have been conducted in several states in the US to explore the technical feasibility of a digital driver's license.

In August 2016, the US Commerce Department's National Institute of Standards and Technology (NIST) awarded a $2M grant to Thales to support the development of a smartphone-based mobile driver’s license to provide citizens a secure companion to their physical license or ID card.

Through this grant, four jurisdictions – Colorado, Maryland, Wyoming and Washington DC – participated in a multi-jurisdiction pilot for a secure mobile driver's license, the first of its kind in the United States. The pilots included a number of scenarios using the mobile driver's license for airport security, Driver Motor Vehicle (DMV) enrollment, age verification, and law enforcement verification, which were all received extremely well by all parties involved.

With hundreds of participants across these four jurisdictions, we learned first-hand that citizens are ready for this technology, and want to use it. In fact, our pilot findings showed that:

9 to 10 participants indicated they felt confident using the mobile driver's license to verify age,
while 4 in 5 liked not having to hand over a physical license. 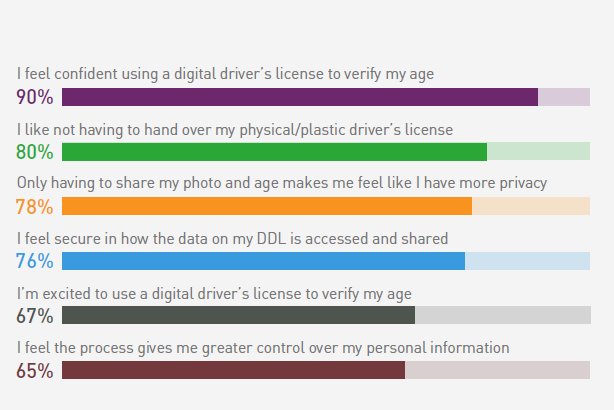 Discover in detail and pictures the July 2017 mobile driver's License pilot in Colorado​.

The convenience of the mobile format,
potential new identification use cases​​

Beyond the critical security aspects, issuing authorities have shown particular interest in the universal convenience of this mobile format:​ 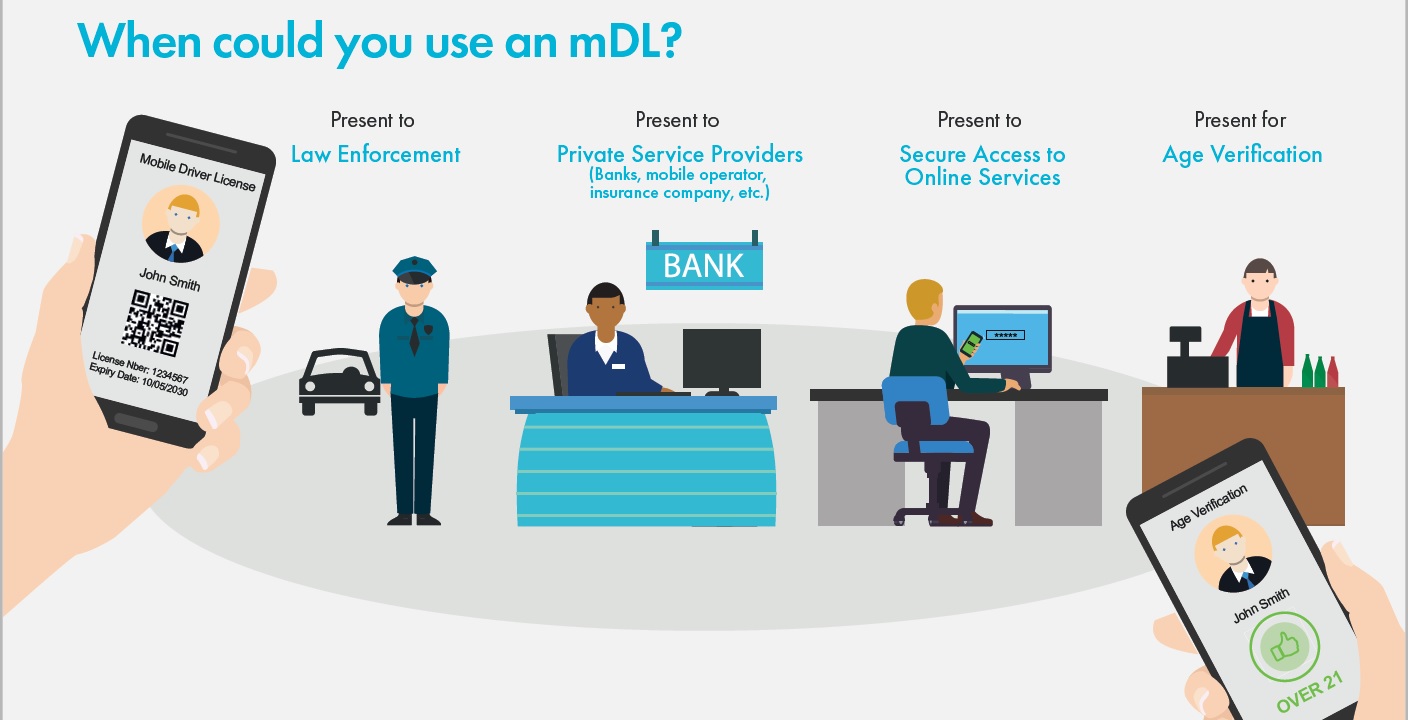 What states have a mobile driver's license?

Several states have passed legislation for or authorized the study of, smartphone driver's license apps. Some highlights are shown in the timeline below:

The legal environment is also positively impacted by the famous Riley v. California case of September 2014. The United States Supreme Court ruled that Police may not, without a warrant, search digital information on a mobile phone seized from an individual during an arrest.

This decision makes it easier for states to implement mDL solutions since the court is clear: Police cannot arbitrarily search phones.​

The 21 December 2020 bill voted by Congress is also explicit (page 423): The presentation of information from a mobile or digital driver's license does not grant access to information stored on the mobile phone, nor can it be seized by authorities.

The same text specifies (page 422) that non-physical versions of driving licenses will be considered valid when Real ID enforcement starts (1 October 2021 according to DHS).

Of course, mobile driver's licenses have to be issued in accordance with regulations.

Moreover, according to Allstate Corporation, one of the largest insurance providers in the United States, ​49 states permit drivers to use an electronic copy of their insurance card​ during a traffic stop as of November 2020.

Other initiatives around the world

New South Wales' Premier Mike Baird promised to introduce the digital license within four years. However, a lot of co-operation will be needed to set up a practical multi-jurisdictional approach in the country.

In November 2016, NSW's Minister for Finance, Services and Property Dominic Perrottet said that digital driver licenses would be introduced by 2019. A pilot in Dubbo​ started in November 2017.

The mDL, to be introduced in September 2019, has been delayed.

South Australia launched its mDL at the end of 2017 and, in September 2019, the Queensland government announced a trial of digital licenses. The test is set to start in 2020 in Fraser Coast.

The digital license app could integrate other digitized documents, including learner licenses, photo ID cards, and vehicle registration. The mobile app could also serve as a key to electronic government services in the future according to IT news of 8 January 2020.

Other countries are also investigating this option.

As of today, the mobile driver license market is at an early stage, and current standards are in the process of being finalized. In 2016, the ISO SC17 WG10 - Task Force 14 "Mobile Driving License" started to work on verification standards for Mobile DL and set the scope of offline verification.

In early December 2017, Thales shared its results from the first phase of pilot activity with the International Organization for Standardization (ISO) technical committee in a meeting in Vienna.

The company brought its contribution to the formation of standards modeling in the future. Data minimization and privacy protection were hot topics covered in session discussions.

Interoperability tests have been organized in Japan in October 2018, in the USA in August 2019, and in Australia in November 2019.

It needs to be:

​Technologies and implementation models
from Thales​

In September 2015, Thales conducted an extensive study with an online consumer community, gathering 200 members from the United Kingdom and the United States.

The direct feedback from potential users of the mobile driver's license solution revealed the benefits, concerns, and diversity of audiences.

These results allowed the company to set up relevant implementation models.

Not only does a digital mDL credential bring new layers of security, such as a PIN or fingerprint verification, but it is also much more difficult to fraudulently duplicate or alter.

Because it is checked with the issuer backend in real-time, a fraudulent credential can quickly and easily be identified as invalid, to make verifying even out-of-state digital credentials significantly more straightforward and more secure.

If a user's mobile device is ever lost or stolen, the mobile driver's license can be remotely deactivated or wiped almost instantly.

Unlike a traditional driver's license card, a mobile driver's license never needs to leave the owner's hands. A person verifying the driving license in the field will have access to advanced real-time authentication through a companion version of the application on an authentication device – either another smartphone or a reader.

No footprint is left on the verification device, and no geo-location tagging or tracking of user information occurs.

With a mobile driver's license, an issuer can have much greater control over in-use credentials compared to a traditional physical license - for example, alerting holders when their license is about to expire.

Citizens could also update their personal information or even renew their licenses directly through the application instead of visiting a branch office, saving time and resources.

Control and convenience will prove essential elements for issuers and users on the road to mobile driver's licenses.

This form of digital credential could enable a new, more efficient, and more secure way of authenticating a person and their entitlement for a range of personal identification usages.

Thales' Digital ID Wallet is the next generation of Mobile-ID, and can seamlessly incorporate a mobile driver license along with other digital identity credentials.

It brings the physical and digital credentials together and creates a secure, smartphone-based home for all the owner's digital identity credentials.

In the public sector, Thales provides secure documents, robust identity solutions, and services for governments, national printers, and integrators in the service of citizens.

Its products and solutions are deployed in more than 200 government programs worldwide.

Our contribution to these projects provides us with an excellent overview of the technology involved, its applications, and the quality of information systems, as well as the context of its use.

Furthermore, our experts have provided support for national debates on how to improve systems, in particular, to fight fraud.

Finally, Thales is an active collaborator in European and global standardization.​