​ID design more challenging than ever

Many readers will be familiar with the story of American teenager Frank Abagnale.

Famously played by Leonardo DiCaprio in the 2002 film Catch Me If You Can, back in the sixties, Frank successfully stole numerous identities and millions of dollars, using nothing more sophisticated than doctored licenses and fake checks.

The days of such low-tech deception are long gone.

Unfortunately, for government institutions, the challenges posed by Identity fraud and forgery are now more sophisticated and much more severe than ever.

First, a technology that is initially sophisticated and exclusive can become mainstream within a few years.

As a result, counterfeiters can get their hands on high-resolution printing equipment and some basic security inks by merely ordering them over the Internet.

There's more and, yes, we know the feeling.

This article – the first in a new series – looks at how the latest generation of "Frank Abagnale's" attempts to change the data on existing identity documents.

But we'll also show that if documents such as drivers' licenses and ID cards are manufactured securely, this type of attack will visibly change their structure.

We'll also explain how resistance can be further enhanced by using transparent security features that run through the entire structure of the document.

But let's start with a quick catch-up.

Tampering with security documents involves the intentional change of personalized data. Fraudsters typically find this a more comfortable option than preparing a fake ID document from scratch or getting hold of a genuine blank document.

Methods typically used in tampering are:

A solid, mono-block document with protected edges and built-in security features represents a robust ID design and an efficient fraud protection weapon for fighting such threats.

Furthermore, a document incorporating good tamper evidence reveals any attempt to alter the data. Changes may uncover in the card thickness and edges and the integrity of the surface, gloss, and color shades.

A document with good tamper evidence will reveal any attempt to alter ID data.

Introduced over twenty years ago, polycarbonate is an increasingly popular choice for ID documents in many countries worldwide. That's because it significantly enhances the ID document's level of resistance to forgery.

What makes polycarbonate so unique?

What sets it apart from other materials is the non-delaminable property of a full polycarbonate ID card.

When used in pure form, laminated under heat and pressure without adhesives, and not mixed with other plastics, the different layers of polycarbonate that make up the identity document fuse together to form a solid monolithic structure.

Guess what… it's the same material used to make bulletproof glass.

And you can hear the difference: polycarbonate cards are so rigid they sound like a compact disc when dropped.

So what's the real story here?

It is impossible to separate the layers of polycarbonate when fused.

This feature is one reason why polycarbonate is so secure: the intertwined layers of plastic make it virtually impossible to swap document information or photos without destroying the document and rendering it useless.

The layered structure is also ideal for deploying security features that can be safely located and protected within a genuine polycarbonate ID.

Take it from us. Polycarbonate is more secure.

How to enhance ID security? Solutions to tampering

Some of the most effective solutions to alteration can be found in security features that go through the entire structure or an integral part of the document.

They make it easy to detect unauthorized access, change, and alteration of the protected ID.

A widely used element to prevent the surface from being tampered with is positive or negative embossing in polycarbonate cards. This feature can be in the form of lenses, fine lines, and micro text, as well as tactile personalization.

Let's see why these robust built-in features have an essential role to play and look at some examples.

In situations where identification is checked, the time available for the document's inspection is typically no longer than 3-5 seconds.

Level 1 security features​, which are those visible to the naked eye, are therefore precious for ID fraud detection.

Crucially, they can be used to guarantee the authenticity of personalized data's document and integrity - instantly and without special tools.

Transparent and semi-transparent elements fall into this category and are being deployed ever more widely.​

The deployment of window features in security printed products was first seen in polymer banknotes.

Polymer banknotes made from biaxially oriented polypropylene (BOPP) have been in use since the 1980s. Yet, the number of countries choosing the material as the basis of their currency is still increasing.

The £5 banknote introduced by the Bank of England in September 2016 illustrates perfectly the power of polymer. The new £10 polymer note was introduced on 14 September 2017.

Starting in February 2020, the current £20 note is phased out and replaced by a polymer note featuring a portrait of artist J. M. W. Turner.

This new £20 note has many security features. They include two see-through windows.

…to ID security (and passport)

Beyond banknotes, the window feature has also spread into laminated identity documents.

Initially, this was a simple see-through element.

Three significant benefits can explain the strong performance of the window feature in resisting fraud and forgery:

The window feature offers a range of both standard and special functions.

A clear opening that is virtually impossible to delaminate or fake.

The most basic function is evident.

It is an 'eye-catcher' that enables instant inspection of the entire layer structure as a see-through element.

But the real potential of a window lies in its versatility. When combined with other security features, interesting special functions are composed. These include:

Besides, a personalized photo can be created as a positive or negative image and as either a full-size or smaller ghost image.

In cards, the window is typically a stand-alone security feature. A window can also be used for self-authentication purposes (for example, the Swedish passport that implements a decoder lens​).

The window can be created on the data page in passports using polycarbonate.

For instance, the new British passport launched in 2020 integrates such a feature.

​A further enhancement of the window feature for your ID design

Window Lock is a new security concept. It is designed to protect the holder's portrait against any subsequent change through an additional laser personalized portrait.

Developed in Switzerland, the technology is based on a sophisticated laser ablation personalization process on a metallic foil integrated into a transparent window.

A ghost image is personalized into the metal foil. Simultaneous manipulation of the card holder's portrait and ghost image after issuance of the document will leave visible traces. 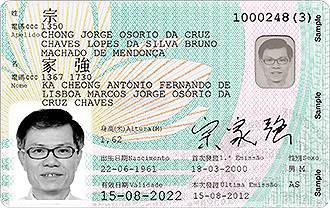 If you're asking yourself how to slash ID fraud and therefore curb ID theft, Thales' Window Lock can be a great security feature on the Macau resident identity card.

It implements a "negative" personalization process where the light-colored is personalized by metal ablation.

Hence, fraudulent manipulation of the cardholder portrait can be easily detected.

Window Lock presents a highly innovative security concept that is easy to understand and verify. As a result, it further increases the security level of travel and identity documents.

So what's the future of the window feature?

Furthermore, a window feature is not limited to just one card material or any specific card structure. Even when not combined with other security features, changes can be made to:

And that's not all.

The window does not have to be a visually detached element somewhere on the card layout. It can also be an elegant part of it while still maintaining security.

Completely new design approaches can be realized utilizing windows. For example, multiple windows can be combined to create new images.

All these possibilities create new, exciting security features based on transparency.

Given this degree of flexibility, there can be no doubt that the use of transparency in ID cards is here to stay.

Do you think transparent elements can help you design a more secure ID?

At Thales, we believe in taking a global approach to security. That's why we strive to provide durable and innovative solutions to improve security, slash ID fraud and identity theft.

We offer extensive experience and support, enabling our customers to meet their expectations for distinctive IDs as secure as they are attractive.

Collaboration with customers lies at the heart of our process, and we will be pleased to share some of our best practices in ID security design with you.

If you have a question on transparent elements or have enjoyed reading our article, please leave a comment in the box below.

​​Is identity fraud a felony?

Finally, here's a word of warning.

Forgery is considered a felony, a serious category of crime in many countries worldwide.

It is punishable by penalties, including jail sentences, fines, probation, and restitution (compensating for money or goods stolen due to the forgery).

Some states in the US treat ID fraud very seriously, particularly regarding drivers' licenses or other state-issued identification forms.

Punishments typically run to several years in prison. If the ID belongs to someone else and you use it for financial purposes, you may also be charged with identity theft. ​​​