Statement from Thales Board of Directors

At the meeting of the Board of Directors on 23 December 2014, Patrice Caine and Henri Proglio were co-opted as directors, following the resignations of Philippe Logak, who had served as Acting Chairman & Chief Executive Officer since the departure of Jean-Bernard Lévy, and Stève Gentili as independent director.

Patrice Caine was subsequently elected to the position of Chairman & Chief Executive Officer of Thales. As such, he will prepare the separation of the role of Chief Executive Officer, which he will hold, and the role of Chairman of the Board, which will be held by Henri Proglio.
Both appointments are subject to confirmation by the next Annual General Meeting, which will also be tasked with approving the necessary changes to the company's articles of incorporation.
Thales's two main shareholders, the French State and Dassault Aviation, welcome these appointments, which are in line with their shareholders' agreement, and will continue to support Thales’s Management and to reinforce the Group's operational performance and international development.

“Thales is one of the most innovative, attractive and dynamic companies in our industry. I am very proud to be given the opportunity to lead our Group whilst at the same
time benefitting from the knowledge and experience of Henri Proglio. With the combined skills and commitment of every Thales employee and the Group’s Executive Committee, I am
more determined than ever to continue to develop Thales’s position as a global leader in Aerospace, Transportation, Defence and Security.” 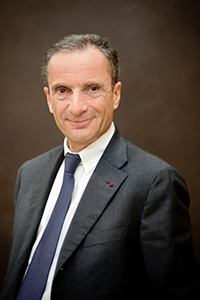 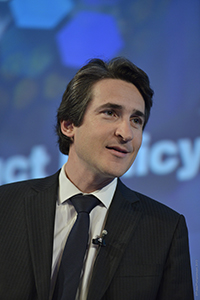 Patrice Caine is a graduate of the École polytechnique and the École des mines de Paris and holds the rank of ingénieur en chef of the corps des mines. He began his career in 1992 with pharmaceutical group Fournier before becoming an adviser on mergers, acquisitions and corporate strategy at Charterhouse Bank Ltd in London.
From 1995 to 1998, he was special adviser to the Prefect of the Franche-Comté region of France and head of the Industrial Development and Energy Division at DRIRE, the French agency responsible for industry, research and the environment.

From 1998 to 2000, he joined the conseil général des mines, where he was in charge of human resources for the corps des mines as well as holding the training of engineering students at the École des mines de Paris for the Technical 'Grand Corps' of the French State. From 2000 to 2002, he held the post of technical advisor with special responsibility for energy at the office of Laurent Fabius, then French Minister for the economy, finance and industry.
In 2002, Patrice Caine joined Thales’s Group Strategy department.

Between 2004 and 2012, he held leadership positions within a number of operating units including tactical, air and naval communications,identification and navigation, radars, Air C4I, air defence systems and air traffic management.

He has been awarded the médaille de la Défense Nationale and is a Chevalier of the Ordre National du Mérite.