The opening ceremony of the Gotthard Tunnel, the world’s longest railway tunnel, will take place today in Switzerland! As a member of the Transtec Gotthard Consortium, Thales has integrated its cutting-edge train control system, ETCS Level 2, into the new Gotthard Tunnel. It will connect the Swiss-Italian and Swiss-German regions under the Alps.
Following the successful completion of the Lötschberg Tunnel, the Gotthard Tunnel will stretch over 57 km at a depth of 2.300 meters under the Alps. This new link will cut travel times from Zurich to Milan to under 3 hours (an hour less than today). It will shift transportation from road to rail, significantly reducing CO2 emissions and is expected to be used by thousands of passengers and freight trains every day – two passenger train and six freight trains every hour.

« We are very proud to contribute to this exceptional project, which was the most important missing link of the European corridors, connecting Rotterdam to Genoa. In spite of the complexity of the programme, we have successfully delivered the whole railway system for the tunnel including Thales’s signalling system, one year in advance. » Peter Huber, General Project Manager Transtec Gotthard

Thales’s advanced ETCS signalling technology will allow for the circulation of more than 300 trains per day at speeds of up to 250km/h in both directions. This is the result of a global investment of 12 billion Swiss francs, including 1.9 billion for the railway equipment and 196 million for Thales’s contribution.


Thales’s involvement in the Gotthard project includes managing the development, production, installation, integration and homologation of the rail signalling systems within the overall system. It has also carried out all the testing procedures. These systems have been built up under realistic conditions in the company’s Gotthard laboratory in Zurich and are the result of 8 years of work by a German-Italian bilingual team!
Note to editors

In the area of control and signalling technology for local and long distance rail transport, Thales is one of the leading providers of trackside equipment worldwide and particularly in Switzerland. Thales counts all major rail companies in Switzerland among our customers and is leading provider of solutions for the European Train Control System (ETCS).

Railway signalling is used to direct railway traffic and keep trains clear of each other at all times. In the early days of the railways, signalmen were responsible for ensuring any points were set correctly before allowing a train to proceed. The concept of the interlocking of points, signals and other appliances was introduced to improve safety. As well as this interlocking function, the latest systems supervise train movements, controlling the exact position and speed of every train on the network. The European Train Control System (ETCS) is a signalling, control and train protection system designed to replace the many incompatible safety systems currently used by each country.
For operators, signalling technology is of strategic importance because it is safety-critical and determines how fast a train can travel and how many trains can travel on the same line in a given time period. 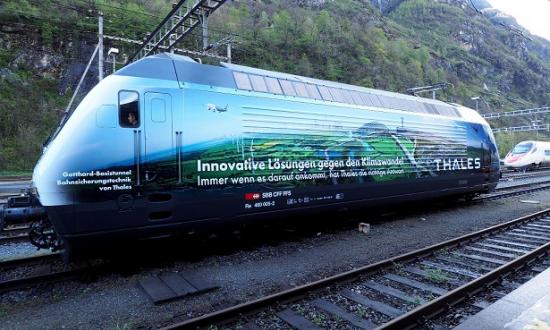