A research team led by Woodrow W Bledsoe ran experiments between 1964 and 1966 to see whether ‘programming computers’ could recognize human faces.

The team used a rudimentary scanner to map the person’s hairline, eyes, and nose. The task of the computer was to find matches.

Bledsoe said: “The face recognition problem is made difficult by the great variability in head rotation and tilt, lighting intensity and angle, facial expression, aging, etc.”

Computers find it harder to recognize faces than beat Grandmasters at chess. It would be many years before these problems were overcome.

Most systems use 2D camera technology, which creates a flat image of a face, and maps ‘nodal points’ (size/shape of eyes, nose, cheekbones, etc.). The system then calculates the nodes’ relative position and converts the data into a numerical code. The recognition algorithms search a stored database of faces for a match.

2D technology works well in stable, well-lit conditions such as passport control. But it is less effective in darker spaces and cannot deliver good results when the subjects move around. It is easy to spoof with a photograph.

One way to overcome these flaws is with liveness detection.

These systems will look for indicators of a non-live image, such as inconsistent features between foreground and background.

They may ask the user to blink or move. They are needed to defeat criminals who try to cheat facial recognition systems by using photographs or masks.

Another critical advance is the ‘deep convolutional neural network.’

This is a type of machine learning in which a model finds patterns in image data.

It deploys a network of artificial neurons that imitates the functioning of the human brain.

In effect, the network behaves like a black box.

It is given input values whose results are not yet known. It then makes checks to ensure the network is producing the expected result. When this is not the case, the system makes adjustments until it is correctly configured and can systematically produce the expected outputs.

For example, Apple uses 3D camera tech to power the thermal infrared-based Face ID feature in its iPhone X. Thermal IR imagery maps the patterns of faces derived primarily from the pattern of superficial blood vessels under the skin.

Apple also sends the captured face pattern to a ‘secure enclave’ in the device. This ensures the authentication happens locally and that the patterns are not accessible by Apple. 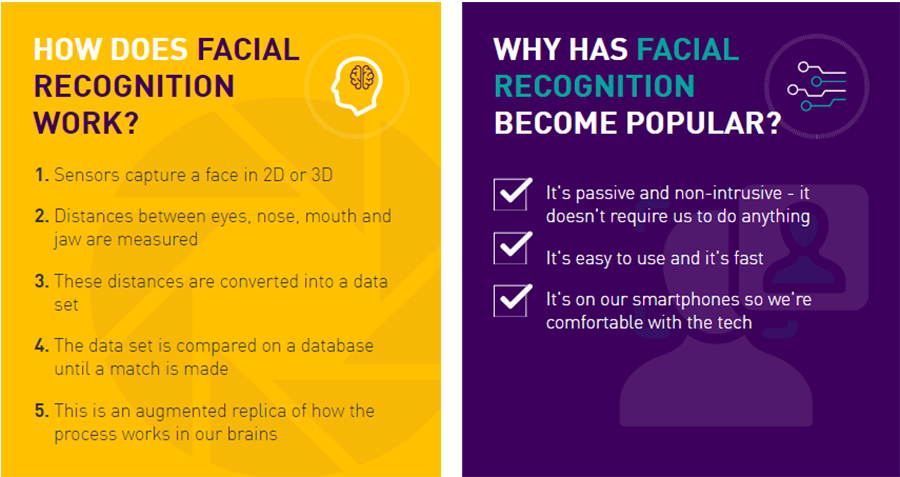 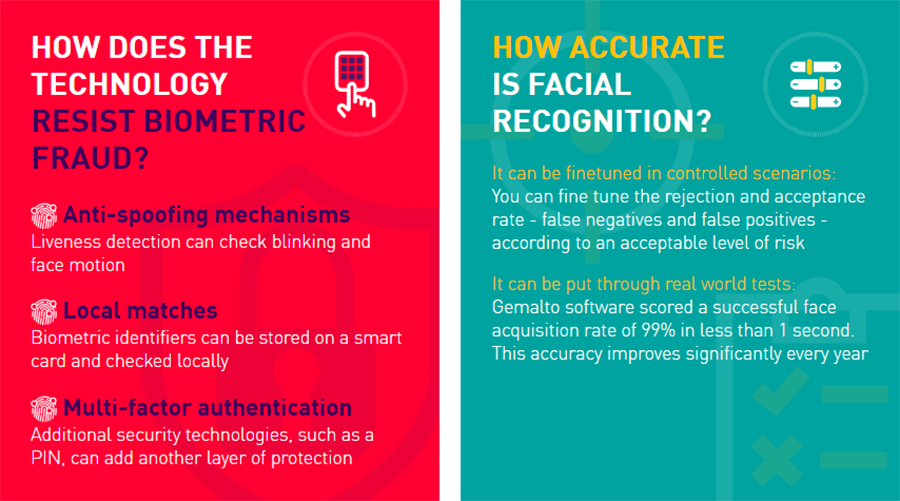 1. False-positive (aka false acceptance)
﻿This describes when a system erroneously makes an incorrect match. The number should be as low as possible.

2. False-negative (aka false rejection)
With a false negative, a genuine user is not matched to his or her profile. This number should also below.

3. True positive
This describes when an enrolled user is correctly matched to his or her profile. This number should be high.

These three measurements are conveyed in percentages. So, let’s say an entry system assesses 1,000 people a day. If five non-approved people are allowed in, the false positive rate is five in 1,000. That’s one in 200 or 0.5%.

So, what percentages do the current systems achieve?

The National Institute of Standards and Technology (NIST) regularly tests multiple systems to search a database of 26.6 million photos.

Its 2018 test found that just 0.2% of searches failed to match the correct image, compared with a 4% failure rate in 2014. That’s a 20x improvement over four years.

NIST computer scientist Patrick Grother says: “The accuracy gains stem from the integration, or complete replacement, of prior approaches with those based on deep convolutional neural networks. As such, face recognition has undergone an industrial revolution.”

Liveness detection systems will look for indicators of a non-live image such as inconsistent features between foreground and background. They may ask the user to blink or move

Further confirmation of the tech improvement came in the Department of Homeland Security’s Biometric Technology Rally in 2018. In its test, Gemalto’s Live Face Identification System (LFIS) scored a 99.44% acquisition rate in under five seconds, compared to the average of 65%.

Facial recognition describes the process of scanning a face and then matching it to the same person on a database. This is the approach used to unlock phones or authenticate a person entering a building.

Face detection is when a system tries to establish that a face is present. Social media companies use face detection to filter and organize images in large catalogs of photos.

The tools used to train the two systems are different. The desired levels of accuracy vary too. Facial recognition for identification purposes needs to score more highly than any system used to organize images merely.

The confusion between the two processes has caused some controversy.

In 2019, a researcher revealed that Amazon’s systems were much better at classifying the gender of light-skinned men than dark-skinned women.

This led to fears that surveillance systems could make more false matches for some ethnic groups.

Computer systems can calculate pi to 31.4 trillion digits. But they have traditionally found it harder to recognize one human face. However, recent breakthroughs can now make reliable facial recognition possible...

This technique uses photographic data to create a 3D map of the face. It captures everything from bone structure to curves around the eye socket, nose and chin. 3D modeling helps systems to recognize and dismiss photographs. It is less constrained by lighting conditions than 2D mapping.

How can a camera capture 3D photographic data? The answer is with an infrared light array. This is how many smartphone facial recognition systems work. Dot projectors shine many thousand pin-points of light onto the face to build a 3D depth map.

Recognizing faces is difficult for computers that have linear calculation-focused ‘minds’. Deep learning overcomes this by using a more sophisticated form of computation that imitates the functioning of the human brain. Here, the computer trains itself using the new data it receives. It makes checks to ensure the network is producing the expected result. When it is not, it makes adjustments until the system is capable of systematically producing the expected result.

New facial recognition systems use surface texture analysis to capture a ‘skinprint’. They scan small patches of skin at the level of fine lines, pores and texture, and then translate them into mathematical measurements. The tech can make facial recognition up to 30% more accurate and ensure live biometric authentication.

Many facial recognition systems protect against hacks by encrypting the facial data and storing it in a local ‘secure enclave’. This means authentication happens instantly on the device, not in the cloud.