All satellites operational, as project teams rise to a daunting technical challenge

Cannes, February 6, 2019 - The Iridium NEXT constellation of satellites, developed and built by Thales Alenia Space, the joint company between Thales (67%) and Leonardo (33%), leading an industrial consortium, is now fully operational. Following eight successful launches* between January 2017 and January 2019, a total of 75 Iridium NEXT satellites are now fully deployed in low Earth orbit (LEO). More specifically, the constellation operates with 66 satellites at an altitude of about 780 kilometers, distributed in six orbital planes of 11 satellites each, backed by nine in-orbit replacement satellites and six ground spares.

Iridium NEXT: a large-scale program and a human achievement

Iridium NEXT is not only an impressive technical achievement, based on a highly innovative, even novel concept, but above all an industrial and human achievement, for which all of Thales Alenia Space’s European facilities teamed up to meet an inspiring challenge.

Thales Alenia Space is prime contractor for the Iridium NEXT program, responsible for engineering, production, procurement and integration operations, along with the ground and in-orbit testing of the constellation’s overall performance.

A feat of technological prowess, carried off with panache by Thales Alenia Space in partnership with subcontractors and the customer, Iridium Communications

Iridium NEXT, the world’s highest performance, most flexible and most sophisticated constellation

The major challenge for Thales Alenia Space was to deploy a complete and complex turnkey system from end to end, while also ensuring compatibility between the old and new generations of Iridium satellites. This is the first time that an operator and a manufacturer have worked hand-in-hand to replace an entire constellation of 66 satellites, one by one, without any interruption in user service**.

The Iridium NEXT constellation represents the state of the art in terms of technology and flexibility. It features global coverage, plus independence from local ground infrastructure due to each satellite being linked to the four closest satellites, in front, behind, to the right and left. No matter where the user is located on land, at sea or in the air, Iridium provides coverage, enabling them to communicate. This type of direct satellite access, whether for transmission or reception, means that reliable communications are available, even in the case of natural disasters or conflicts, in isolated areas, or to provide secure communications with protection against intrusion and piracy***.

Denis Allard, Vice President for Constellation Projects at Thales Alenia Space, said, “Thales Alenia Space is especially proud of having built the Iridium NEXT constellation. We have delivered all 81 satellites in this system, now operational, right on schedule, rising to a challenge that our people met with panache. The success of this complex program further confirms Thales Alenia Space’s global leadership in the constellation market, and also consolidates our unrivaled expertise as prime contractor for complex end-to-end and turnkey communications systems.” 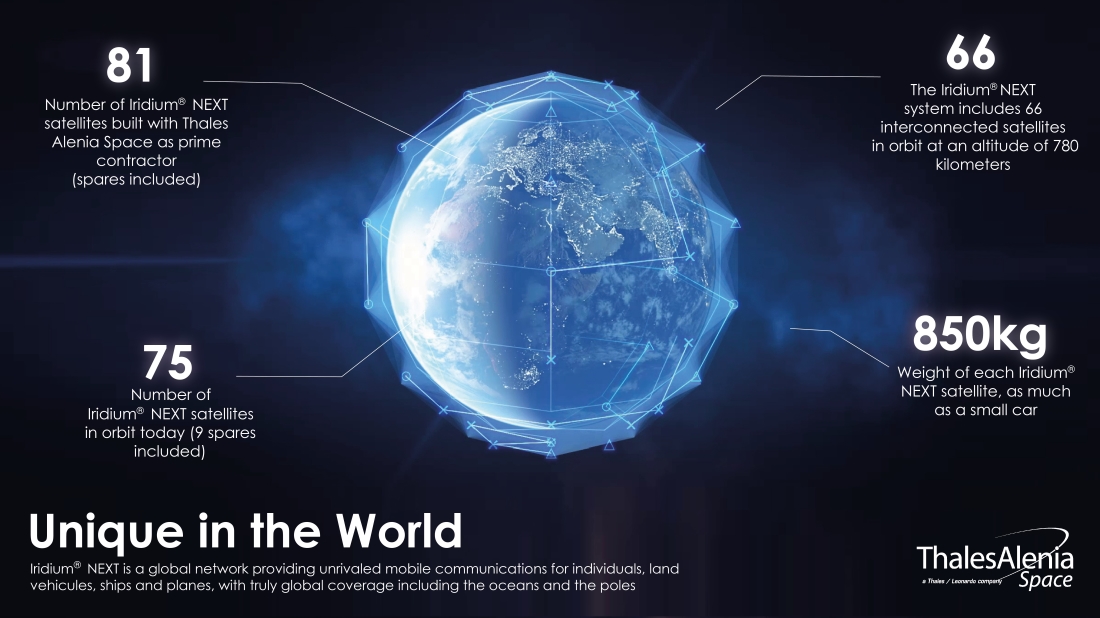 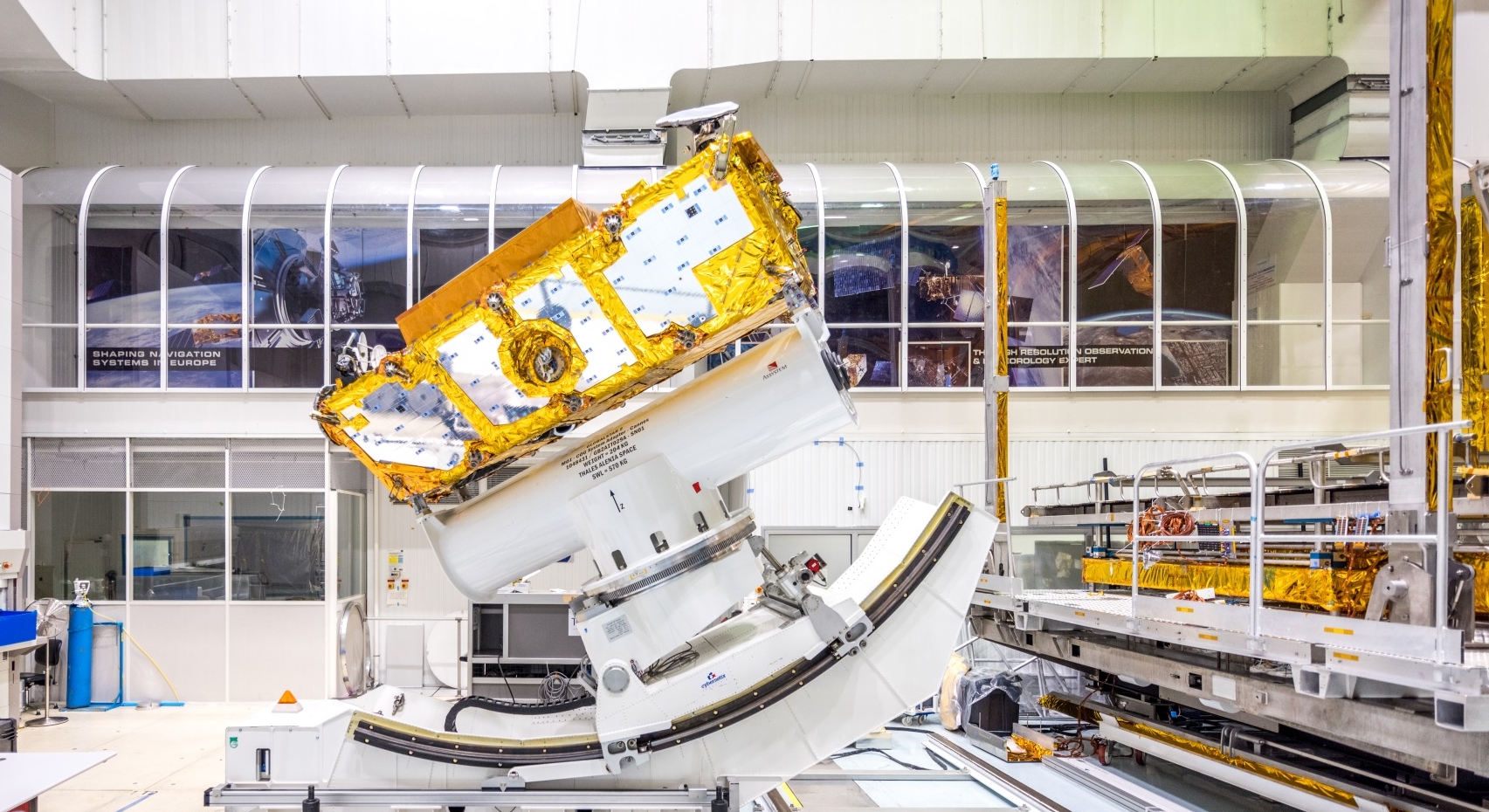 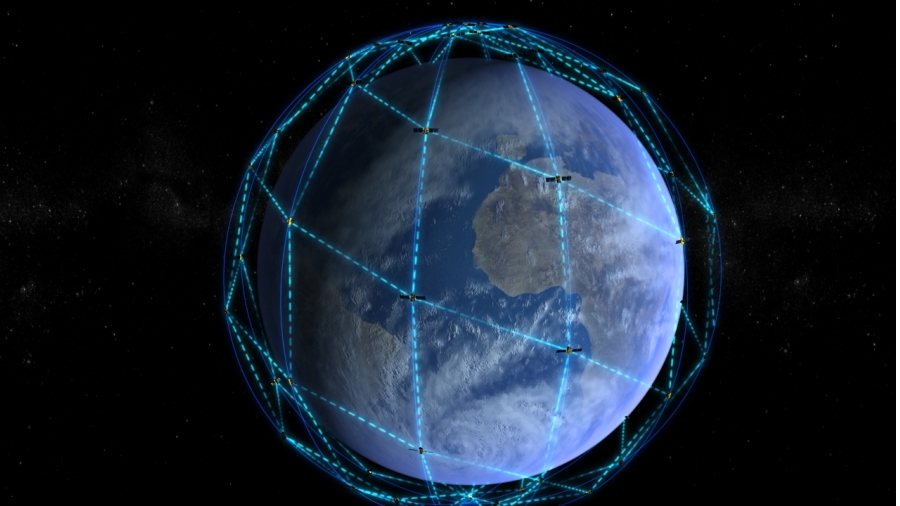 Look back to last Iridium NEXT launch #IridiumNEXT

Iridium NEXT: the most sophisticated communications system ever (WSBW 2018)

Drawing on over 40 years of experience and a unique combination of skills, expertise and cultures, Thales Alenia Space delivers cost-effective solutions for telecommunications, navigation, Earth observation, environmental management, exploration, science and orbital infrastructures. Governments and private industry alike count on Thales Alenia Space to design satellite-based systems that provide anytime, anywhere connections and positioning, monitor our planet, enhance management of its resources, and explore our Solar System and beyond. Thales Alenia Space sees space as a new horizon, helping to build a better, more sustainable life on Earth. A joint venture between Thales (67%) and Leonardo (33%), Thales Alenia Space also teams up with Telespazio to form the parent companies’ Space Alliance, which offers a complete range of services. Thales Alenia Space posted consolidated revenues of 2.6 billion euros in 2017 and has 7,980 employees in nine countries. www.thalesaleniaspace.com