What's so special about EURODAC?

Eurodac was the first biometrically enabled system commissioned by the European Union and the first multinational biometric system globally. Eurodac has been operating continuously since going live on 15 January 2003 and has undergone many expansions and upgrades.

This web dossier will focus on the Eurodac biometric system (European Dactyloscopy System):

Cogent Systems​, recently acquired by Thales, has been involved in this project since 2002 when it won a contract to supply the Eurodac Automated Fingerprint Identification System (AFIS) - a role Thales Cogent still performs to this day.

Just two years after the Dublin Convention of 1990, which stated that Asylum applications should be made in the first country of entry into the European Union, Germany set up its fingerprint database of people requesting asylum in different parts of Germany.

So already at that time, ten years before Eurodac, the concept of "asylum shopping" was identified as a problem that needed to be tackled.

Even then, it was recognised that a pan-European database for asylum seekers was technically possible.

It was while the European Commission's "Ad Hoc Group on Immigration" was considering whether and how to implement such a system on a cross-EU basis something happened.

Throughout 1996 refugees fleeing the war in Iraq were arriving in Turkey and attempting to cross into Europe.

Trafficking gangs assisted those seeking a better life in Northern Europe to exit on rubber boats and on overcrowded metal hulks – scenes that continue to this day.

Then on 2 November 1997, a boat called the "Hassan Beirut" carrying 769 people, mainly Kurds, ran aground and became stranded off the coast of Italy, many of whom continued their journey through Italy towards Germany.

Crisis talks involving affected Members' States sought to find a political solution. And so it was that against this background, the plans for Eurodac took on a second objective – not just to record a request for asylum at the first point of entry but also to register those attempting to enter illegally.

Legislation followed with Regulations on 11 December 2000 and 28 February 2002. And to implement the EU refugee policy, Eurodac, leveraging biometric technology, was designed and commissioned.

The New Pact on Immigration and Asylum was adopted on 23 September 2020.

The Eurodac system enables the comparison of fingerprints of asylum applicants and persons apprehended in connection to an irregular or illegal border crossing in 32 States.

28 EU Member States (including the UK) and 4 Associated Dublin States (Iceland, Norway, Liechtenstein, and Switzerland) use the system.

The new Eurodac Regulation No 603/2013 took effect in July 2015, and national police forces and Europol can now access the system and its fingerprint database for prevention, detection, and investigation of the most severe forms of crime including terrorism.

Why a biometric system?

The goal of Eurodac in the asylum process is to facilitate the application of the Dublin III Regulation.

It provides a mechanism for determining which country is responsible for examining applications for international protection lodged in one of the member states.

Budapest, Hungary – 10 September 2015: Refugees are standing up and waiting to take a train to Vienna under the supervision of Hungarian police. Many refugees are crossing Hungary from Syria, going to other countries of Europe like Germany, Austria, Sweden, or Denmark. They are looking for a better future for their families.

What information does the Eurodac store?

​In response to the migrant crisis, proposals are being considered by the European Parliament to increase the information stored in Eurodac about individuals, such as assisting in reuniting family members. 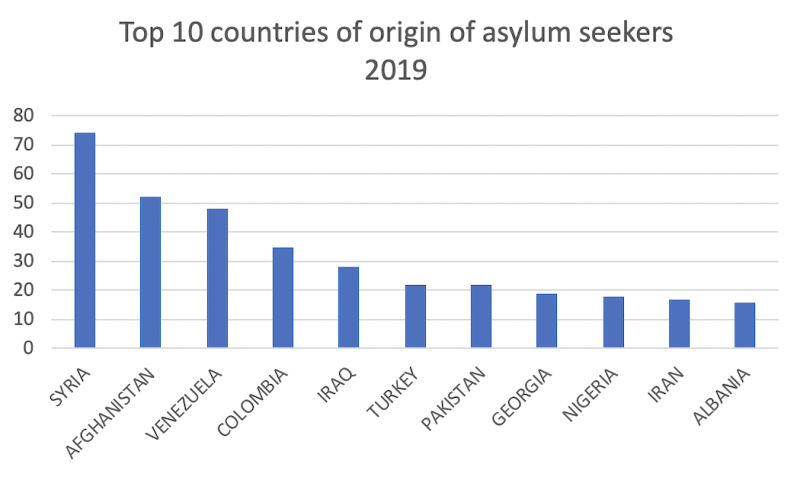 Eurodac underwent major redesigns, first in 2009 and then again in 2015, with "Eurodac Recast," when new workflows were introduced that had to be in place legally at the central and national level by 20 July 2015.

The new architecture was put in place successfully on time, and with it, a new, more accurate matching algorithm was employed.

This graph from EUROSTAT data shows the numbers of people requesting asylum from the system's early days to the present day.

According to EUROSTAT, for 2020, 521,000 first instance decisions were made by the national authorities of EU Member States.

40.7 % were positive, that is granting a type of protection status.

Whereas around one-third of the applications were repeated applications in the early years, during the worst part of the crisis, almost all have been first-time applications.

Of course, the capacity of the system had to be scaled accordingly. ​

The fingerprint database was initially designed to contain 1.6 million records in 2003.

This capacity was increased in 2009 to 2.8 million records, increased twice more in 2015, first to 3.6 million and then to 5 million, and recently increased to 7 million records, all the while ensuring a high degree of accuracy by providing that each fingerprint record is checked in a one-to-many search.

The Eurodac annual report for 2020 published in March 2021, showed that, for this year, the system processed:

In 10% of cases, the biographic data was found to be inadequate, and in 3 % of cases (22,410), the quality of the fingerprint acquired was too weak.

Perhaps where Eurodac differs most from many other AFIS​ systems are in its unique workflow requirements.

They are designed to ensure that only Member States can change or read their records while ensuring that individual freedoms and rights are protected in the event of an individual being granted asylum or citizenship of a Member State.

As of 1 January 2021, the UK has lost access to EURODAC. To claim asylum in the UK, a person must now be in the country as there is no asylum visa. It's not allowed to apply from outside the country either. A person would then have to enter the Kingdom either for tourism, studies or illegally.

In conclusion, Eurodac is the largest multi-jurisdictional AFIS in the world, serving 32 countries. It utilises the latest biometric matching technology to support a unique set of business rules, achieving that with very high reliability.​

Looking forward, we see yet more change down the line, including new search types and perhaps face recognition capabilities.

As with Eurodac, Thales' biometric solutions need to work in real-life environments on European borders and around the world – at night, in the dark and in the rain and wind at a seaport, sometimes at -20°C or conversely in bright sunlight.

Our expert teams can support you in meeting these real-life challenges.

How can Thales Cogent AFIS solutions better help you?

Cogent AFISes are already deployed to over 200 applications in more than 80 countries worldwide.

Thales solutions can also secure your AFIS system with strong authentication and encryption solutions (HSM and tokenisation) as the company does with India's Aadhaar​ , the largest biometric database in the world.

If you've something to say on this topic, a question, or have found this article useful; please leave a comment in the box below.

We'd also welcome any suggestions on how it could be improved or proposals for future papers.