Navies around the world need to perform a variety of missions, from Maritime Security Operations in territorial waters to Theater operations and Power Projection, from littorals to deep seas.

Thales has developed the low frequency dipping sonar FLASH (Folding Light Acoustic System for Helicopters) with exceptional ASW performances and for any type of ASW helicopter. As a matter of fact, FLASH is already certified on the ASW versions of platforms such as MH60R, NFH90 “Caiman”, Super Puma, AW101 “Merlin”, AW159 or SL300.

With more than 500 FLASH-based systems ordered or in service today in navies such as the US Navy, the UK Royal Navy, the French Navy, the Royal Australian Navy, the Royal Norwegian Navy or the Republic Of Korea Navy, FLASH has demonstrated its unrivalled capabilities and reliability at sea in any environment, from shallow waters to deep seas.

When used in conjunction with a Low Frequency VDS (Variable Depth Sonar), the FLASH/VDS combination constitutes a terrific ASW system to detect, locate and classify more and more stealthy and capable submarines in any environment. Thales “CAPTAS” VDS’s are particularly fit to work in a collaborative manner with FLASH as their operating frequency bands are consistent as well as their sonar processing software.

Late 2021, and for the second time in a row, French Navy FREMM Frigates - both fitted with BlueMaster and CAPTAS-4 - in collaboration with US Navy MH60R helicopters equipped with FLASH - won the US Navy's "Hook'em" award for their ability to find and track submarines.

In a world where Navies are facing growing and sometimes unexpected threats and challenges, Anti-Submarine Warfare is resurging as a key discipline for the 21st century and Thales FLASH dipping sonar product range offers the best solutions to ensure Navies effectiveness and safety at sea. 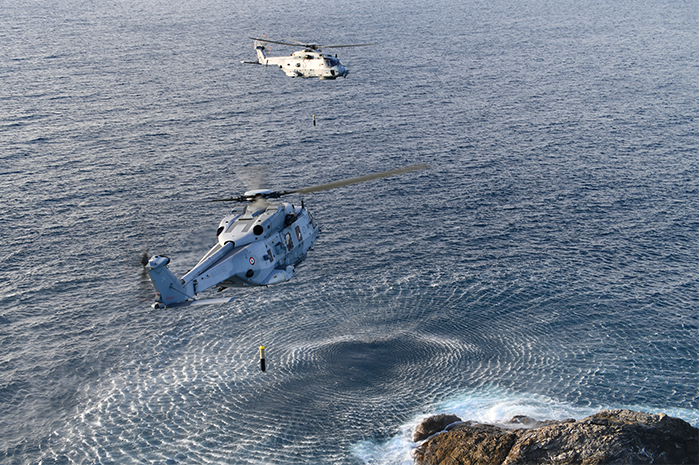 For the first time, the German Navy will rely on Thales to equip its NH90 Multi Role Frigate Helicopter (MRFH) with FLASH SONICS. The FLASH system (Folding Light Acoustic System for Helicopters) is currently the leading dipping sonar on the international market and has ...