Biometrics to transform air travel and the "passenger experience" 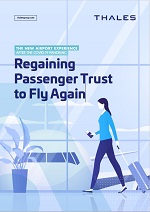 This white paper gives an overview of requirements that airports are facing with the ongoing pandemic in terms of health/hygienic protocols, safety/security procedures and capacity restrictions and how Thales delivers a comprehensive offer of innovative solutions to manage these new procedures and regulations.